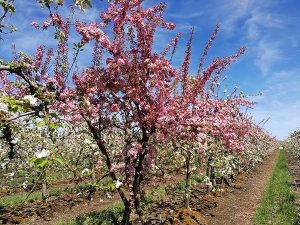 Early in the 1980’s Stanley Orchards Sales, Inc. began importing apples and pears, becoming a major distributor of Chilean and Argentine apples, pears, grapes, stone fruit, and cherries throughout the U.S. and Canada. We now represent such prestigious South American labels as Rucaray, Magna, Frugal, Austrade, Ecofrut, and La Conquista while offering a full range of the varieties grown in those countries for both conventional and organic products. We are currently ranked as the 3rd largest US importer of Chilean Apples and among the largest importers of Chilean and Argentine Pears in North America while also importing apples from New Zealand. We are capable of directing our imported products to many ports in the US (NY, Philadelphia, Miami, Los Angeles, Seattle, and Puerto Rico) in order to better serve the needs of our customers. Our imported fruit is both inspected at its source and at destination to insure consistent quality for our customers.